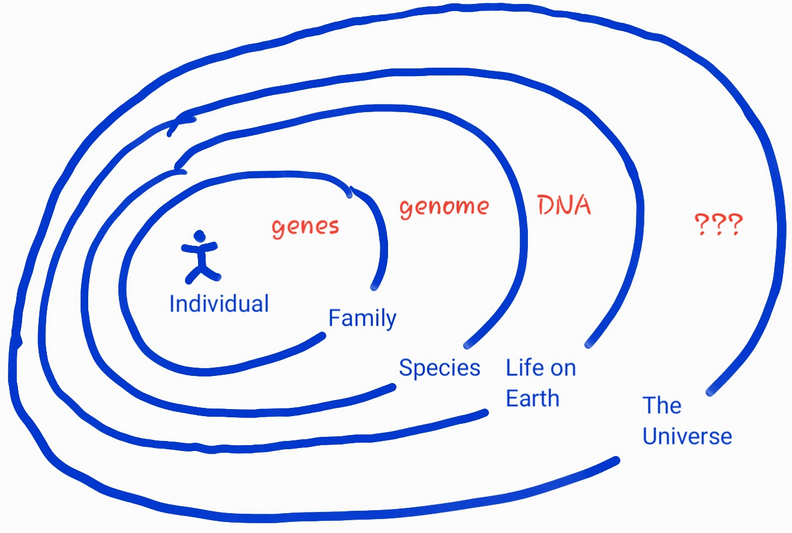 Our culture tends to assume that selfishness is natural, while altrusim requires an explanation. But why?

This question sprang to my mind the other day, while I was reading John Bradshaw’s “In Defense of Dogs” (a book I am enjoying greatly – but that’s a different topic). I noticed a statement, made in passing, that whereas biologists do not feel the need to explain altruism in animals when it is directed towards members of the individual’s family, when this is not the case it always calls for an explanation. I get the impression that this is quite a well-established and reasonable view: when an individual helps a member of its family to survive, it is aiding the propagation of some of its genes – half when we help our offspring, one quarter when we help a sibling, one eighth when we help a first cousin, and so on. In contrast, helping a completely unrelated individual does not help the helper’s genes to propagate.

But then I thought: what if the other individual is of the same species? It does not help any of your genes, but that individual shares the same genome – the genome of your species – so you are helping your genome, and therefore your species, to survive. It would be reasonable to expect that species may have evolved whose evolutionary strategy includes altruism towards individuals of the same species, which would have given that species a competitive advantage against other species. This seems to me quite reasonable. But if we start to think that way, then we have to ask: what about helping individuals of other species? All species on Earth share the use of DNA as the gene-encoding substrate, so species that ehlp other species are contributing to the survival of DNA-based life. In fact, when you think of it, it is evident that all life on Earth is cooperating on a global scale, e.g. the plants capture CO2 and release oxygen that we breathe. While DNA-based lifeforms are not in direct competition with other forms of life, they may have been in the past, and in any case the DNA-based living Earth is always competing with the alternative, dead Earth. So again, if different species had not helped each other out perhaps there would be no life on Earth.

So I think a more reasonable approach is to consider that there is a hierarchy of levels of organisation, and at every level cooperation is essential to make the whole possible (see figure). There are even some intermediate levels, for example oxygen-breathing lifeforms helped each other in competition with sulfur-based ones, for example. So although when you look at the nitty-gritty of specific interactions between individuals there seems to be a lot of competition going round, I think the big story of life on Earth is one of cooperation: cooperation leads to behaviours that can reinforce themselves and survive, while pure competition leads to an “averaging out to zero”. So what is natural is cooperation and leads to what we observe -be it life on Earth or the magnetic field of a neodymium magnet.

It is also, incidentally, a nicer way to look at the world than the Victorian cut-throat tinge with which natural evolution is often described.

View all posts by JQ